Skip to content
Free Shipping on orders $100.00 or more anywhere in the United States—Excluding Alaska, Hawaii and Puerto Rico 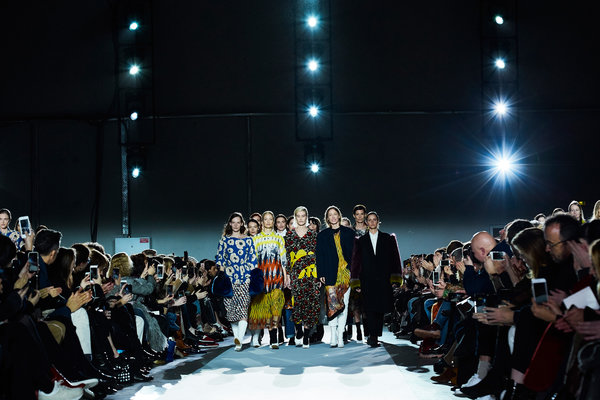 Paris Fashion Week marked a few important milestones: The designer Dries Van Noten held his 100th runway show, a celebratory marker of a brilliant career. The collection, which featured vibrant prints, oversize silhouettes and jewel-toned faux fur jackets, was modeled by the greatest names in the business, including Amber Valletta, Nadja Auermann and Kirsten Owen — all models who have walked in Van Noten’s shows since 1993. Later in the week, Jean Touitou of A.P.C. celebrated his 30th year in business with an intimate show at the brand’s studio on the Left Bank. The collection was about simplicity, but done well: there were no-fuss denim jackets, pants, trench coats and military dresses. 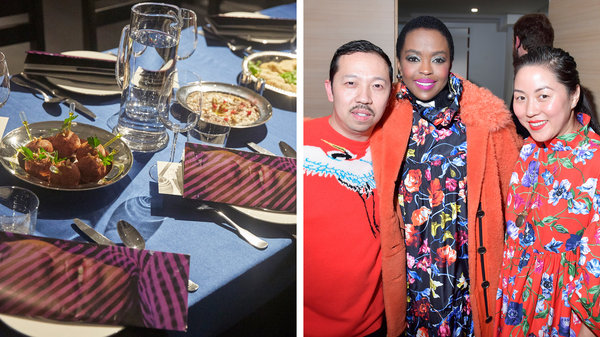 Humberto Leon and Carol Lim know how to put on a show. At an intimate affair in their Kenzo showroom in Paris, the design duo introduced La Collection Memento N°1 — the first in a new series inspired by the label’s archives. A live band set the tone, and a comforting, family-style dinner of Syrian food (tabbouleh, baba ganoush and fried kibbeh) followed. A live performance by Lauryn Hill closed out the spectacular evening. If only all fashion shows could be so nice. 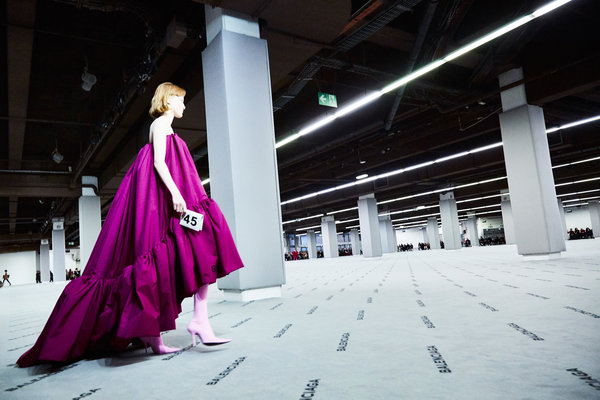 3. The Balenciaga Show Was Spectacular

The set for the Balenciaga show, which was held in the basement of the Espace Champerret Salon Saveurs, featured wall-to-wall carpet emblazoned with the brand’s logo. The collection featured reworked trench coats, floral dresses and voluminous knits — but what really dazzled were the final nine looks, all reissued couture dresses from the archives, which were incorporated in the show to celebrate the brand’s 100th anniversary. 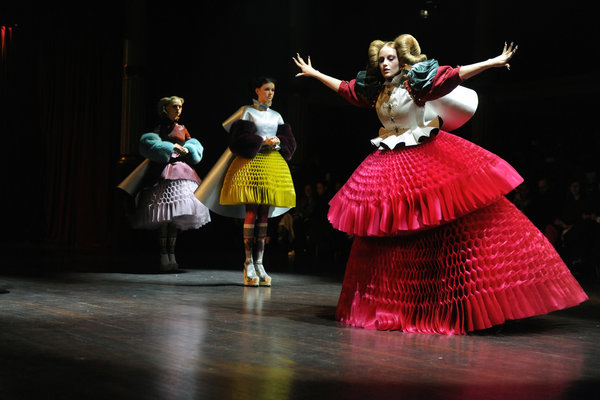 4. The Undercover Show Was the Most Artistic of the Week

This season, more than ever, designers stuck to traditional runway presentations for their shows. But not Jun Takahashi, the designer of Undercover, who has become known for theatrical presentations that feel more like pieces of performance art than runway shows. Set to a soundtrack by the designer’s friend and collaborator Thom Yorke, the show featured a series of vignettes starring different archetypes: soldiers, aristocrats, clergy members and mythical, birdlike creatures. It culminated with an Elizabethan-like queen, whose hair was molded into ramlike horns, moving beautifully around the stage. 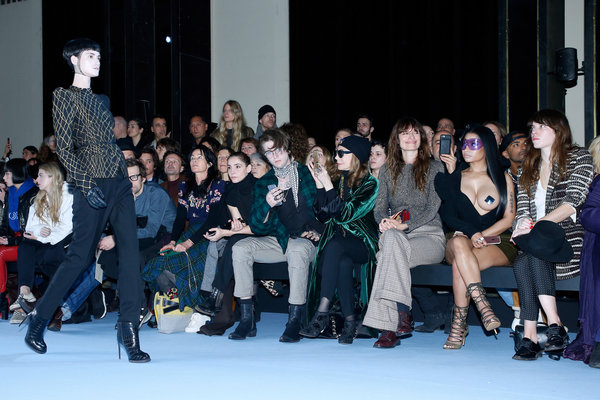 5. The Season’s Most Talked-About Look

It hardly comes as a surprise these days when guests arrive dressed in barely-there designs — but Nicki Minaj’s scantily clad look was quite possibly the talk of Paris Fashion Week. The hip-hop artist attended the Haider Ackermann show in an asymmetrical dress that exposed one silver-pasty-covered breast. It recalled Lil’ Kim’s purple rendition of the look at the Grammy awards in 1999 — and certainly woke up sleepy showgoers on a rainy Saturday morning. 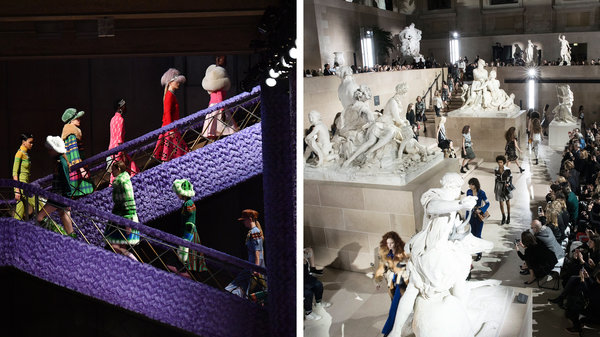 6. There Were a Few Showstopping Sets

This season in Paris, it seemed money was no object. Céline turned the traditional runway show on its head — and around: Guests sat on bleachers that spun in circles, as though situated atop giant turntables, as models walked around them in a chaotic sequence. Over at Miu Miu, the Conseil Economique Social et Environnemental, a government office building, was transformed into the setting of a magical dream with shaggy lilac (fake) fur, which covered the grand stairs, columns and walls. And in a true power move, the last show of the season, Louis Vuitton, took place at the Muse du Louvre. 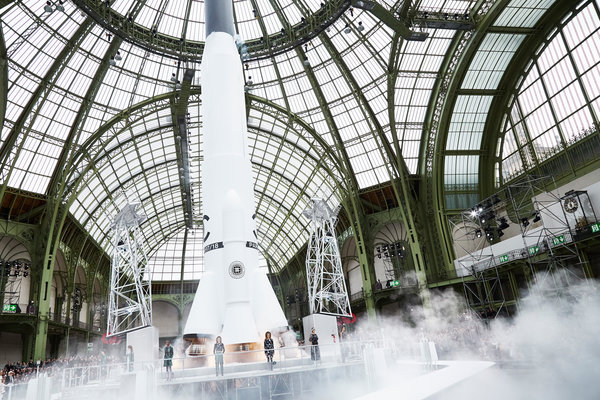 7. Chanel Took Us To Space

Karl Lagerfeld never fails to dazzle his audience — not just with his clothes, but in the set department, too. Each season he converts the Grand Palais into something elaborate and unexpected: a giant supermarket, a Parisian cafe, even a casino. But this season, he went above and beyond: he launched a Chanel rocket. His fall/winter 2017 runway show unfolded around a life-size rocket that just nudged the atrium of the grand palais, as if it was ready to break the ceiling. At the end of the show (which featured Barbarella-like models in glittery 60s boots), Lagerfeld took a bow with his godson, Hudson Kroeing. He pressed a button and flames erupted as the rocket took off to (what else) Elton John’s “Rocket Man.” The only thing more shocking would be if the rocket actually broke through the glass ceiling and launched into space. Guess we need something to look forward to for next season! 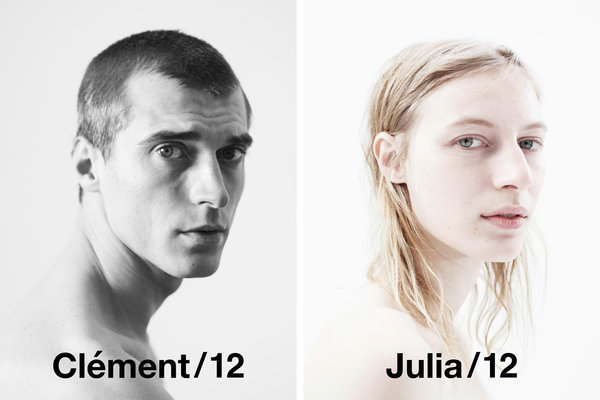 8. And the Week Welcomed a Super-Cool Fanzine

Photographers, designers and models gathered on a rainy night to celebrate Idea Books’ launch of /12, a series of 12 zines by the photographer Willy Vanderperre. The first two launch were of the models Julia Nobis and Clement Chabernaud. Guests braved the rain to pick up a copy — but don’t fret if you didn’t make it: Ten more issues will be released on the first day of every month. 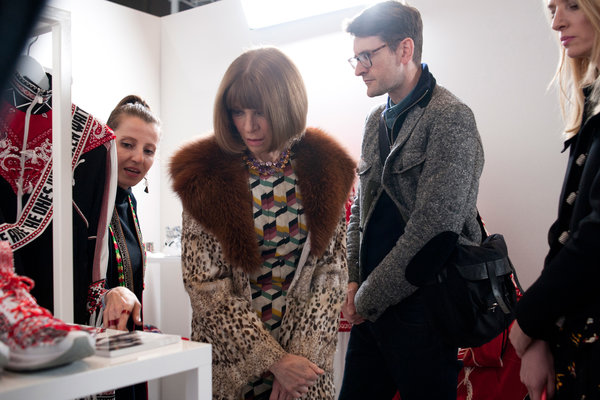 9. Everyone Took a Moment to Honor Emerging Designers

It’s always nice, in the chaos of fashion week, to pause and admire young talent vying for the LVMH Prize. This week, several hopefuls showed their collections to the likes of Bernard Arnault, Anna Wintour and Karl Lagerfeld (to name a few). This year is one of the strongest groups yet with the likes of Molly Goddard, Charles Jeffrey and Martine Rose all up for the coveted prize, which will be announced this summer. 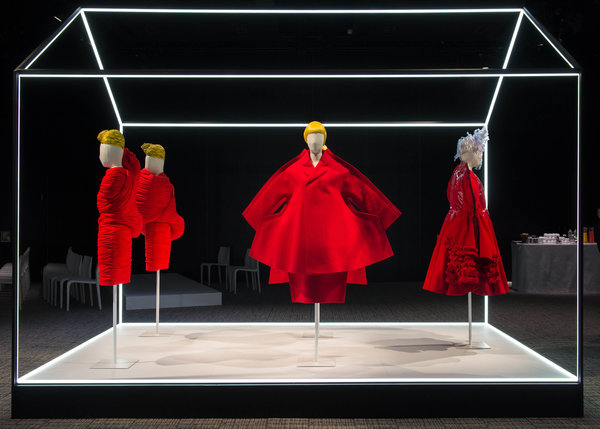 10. And We Got a Glimpse of a Much-Anticipated Show

This spring, Rei Kawakubo, the visionary behind the Comme des Garçons label, will be only the second living designer to be featured in an exhibition at the Metropolitan Museum of Art’s Costume Institute. (The first was Yves Saint Laurent.) But first, she showed an epic new fashion collection on the runway at Paris Fashion Week — which was attended by the Costume Institute Curator in Charge, Andrew Bolton and Anna Wintour. The three met again at the Met’s official press conference on Monday to share a glimpse of the forthcoming exhibition, “Rei Kawakubo/Comme des Garçons: Art of the In-Between,” including an all-red selection of garments from the Comme des Garçons Archives. The excitement is brewing!